Incastro products include Italian blocks for children, whose structure undoubtedly stands out from traditional blocks. The most characteristic aspect of this brand's toys is the unusual appearance of the elements. All blocks are designed in the shape of the letter X, which, combined with their flexible structure, allows you to create unique structures. Having 4 blocks at their disposal, a child is able to obtain as many as 16 different combinations, which gives unlimited possibilities for creating any objects on many levels. The only limit is the imagination of the little builder.

Incastro blocks for children over 4 years of age

The sets we offer are dedicated to children over 4 years of age. Individual sets include from 40 to 500 elements characterized by beautiful, saturated colors and high quality of workmanship. The soft structure of the elements makes Incastro toys safe blocks for children, which can also be used by the youngest users. By interacting with blocks from an early age, the child successively develops important features and skills, such as spatial imagination, creativity, logical thinking and patience.

Incastro blocks for girls and boys

Among the products of brands and Incastro , there are also building blocks for girls, which have been designed especially for little princesses. Sets in the version for girls contain pastel blocks along with the practical Incastro are innovative construction blocks made in Italy, consisting of colorful elements with a uniform, intriguing shape. They can be combined in many planes, thanks to which we can build both 2D and 3D objects. These can be: bridges, towers, buildings, animals, musical instruments, jewelry, flags, spaceships and many others, the only limitation here is the imagination of the builder. The structure made of Incastro blocks is so strong that you can easily make utility items such as: stands for photos or books, toolboxes, bottle stands, etc. The construction bricks were designed by someone who really knows the construction and design industry, i.e. an architect. The intriguing shape of the elements, vivid colors and, above all, the number of variants of their combination mean that with each new building there is a new challenge and a question that the child will not leave unanswered - can I? 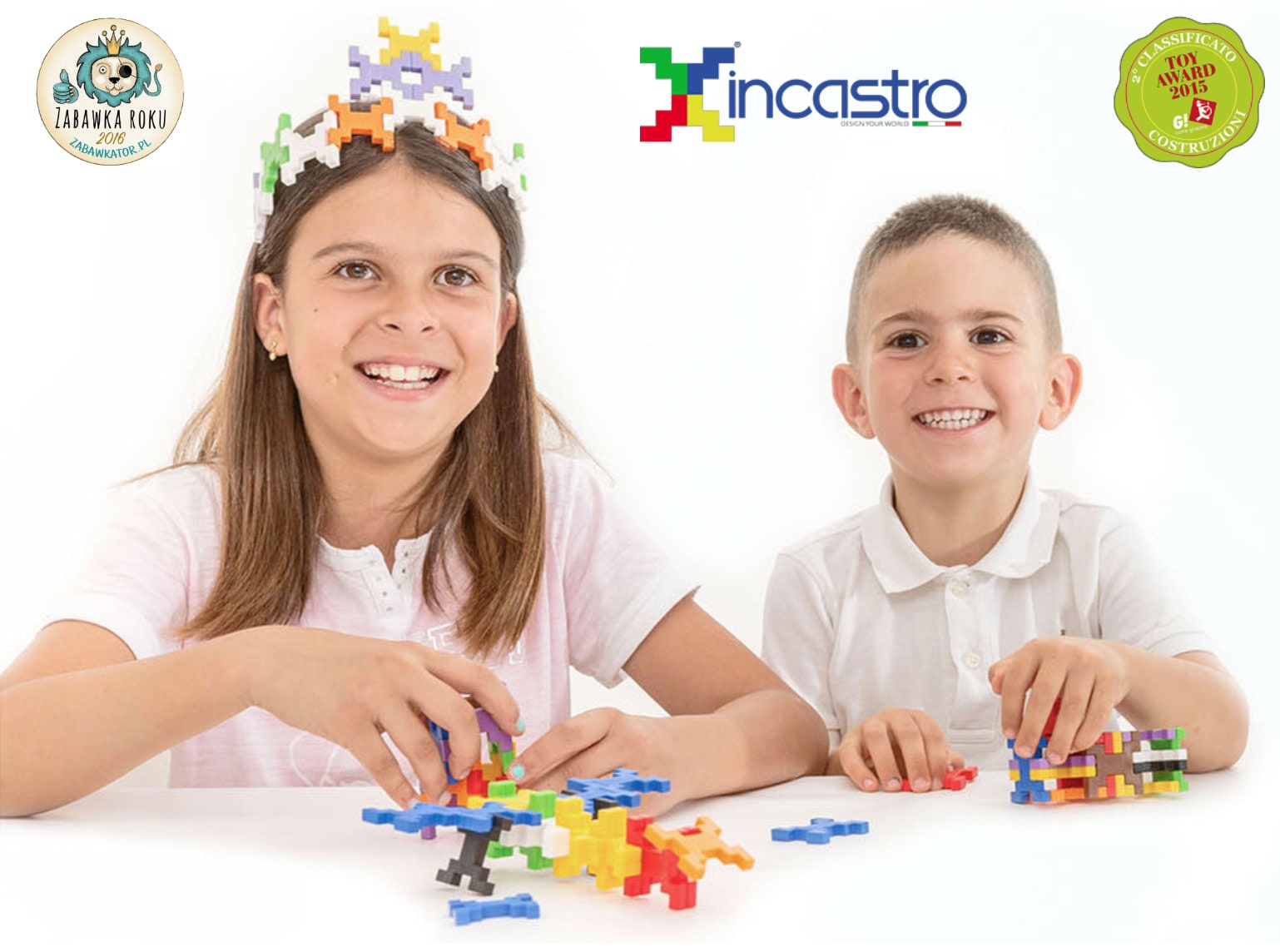 The blocks teach logical thinking - 4 blocks can be connected in as many as 16 ways, so you have to choose the one that will open the possibility of obtaining the desired form.
They also teach patience - thanks to the complexity of the shape of the blocks, the first attempts to build are difficult. You have to learn the possibilities of the "building material", which requires trials and time. However, the more solutions a child discovers, the higher the level it will be able to achieve, in order to create multiple complex spatial structures over time. Patience, determination in action, and concentration of attention are features that a child is still developing. Incastro construction bricks are a great tool in educating them. They teach that it is worth trying, that you can reach your goal in several ways, that at the end of the action there is a priceless satisfaction from your own persistence that allows you to achieve it. Develops spatial imagination - before a child starts building, they usually know what effect they would like to achieve.
Add to compare
Compare products (0) Remove products
-28% Sale

Our Shop and our Trusted Partners process your personal data collected on the Internet, e.g. your device's IP address and information saved using tracking and storage technologies such as cookies, web beacons or other similar technologies.

By clicking "I AGREE, I WANT TO GO TO THE WEBSITE" you consent to the use of cookies in accordance with your browser settings and to adjustment the content on our Shop's website to your preferences, as well as for statistical and marketing purposes, including displaying personalized (advertising) content. You can withdraw your consent at any time by deleting cookies from your browser from a given end device.

I DO NOT AGREE
I AGREE, I WANT TO GO TO THE WEBSITE